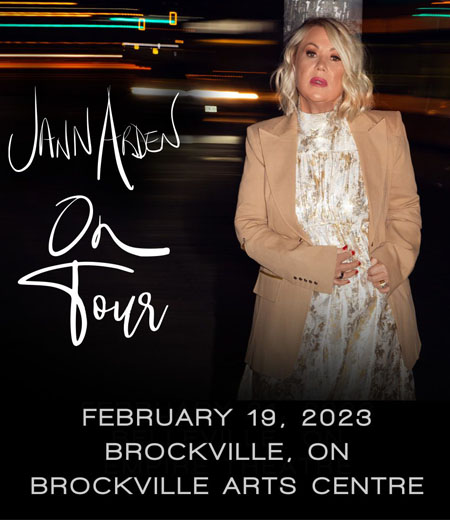 Multi-award winning folk-pop singer, songwriter and actress Jann Arden (born 27 March 1962) aka Jann Arden Richards from Alberta, Canada has not only had a successful international career but has her name etched in a star on Canada’s Walk of Fame.

With early influences stemming from the likes of John Denver and Karen Carpenter, Arden began song writing at the age of thirteen. Four years later she made her recording debut with her first single “Never Love a Sailor”. Spending the next few years perfecting her craft, Arden did the club and festival circuit round her hometown with performances alongside Factor 4 and Hip Hugger and in 1985 Arden was discovered by future manager Neil MacGonigill who became a pivotal character in her quest for success.

Arden got her big break when she released her debut album “Time for Mercy” in 1993 via A&M Records. The album certified platinum and featured the hit singles “I Would Die for You” and “Will You Remember Me” marking the beginning of her striking commercial gold. Her follow up album “Living Under June” released the following year, peaked at number five in the Canadian music charts, achieving a staggering five time platinum status. The album provided Arden with her biggest success outside of Canada with the single “Insensitive” while also snagging the number one spot in the Canadian singles charts. The song also featured on the soundtrack to the Christian Slater film “Bed of Roses”.

With ten studio albums under her belt, 17 top ten singles, multiple Juno awards and her name firmly cemented on the Canadian Walk of Fame, Arden not only stands tall as a well-respected national figure but also widely recognised for her incredible song-writing ability. Adding to her list of impressive accolades, Jann has also performed in the stage production of “The Vagina Monologues”. Jann has toured with fellow Canadian Michael Buble’s 2005 US and European tour and lent a hand in co-writing his single “Close Your Eyes”. Arden released her tenth album “Everything Almost” in 2014 through Universal Canada and peaked at number two in the album charts.